At Arches at Whitney Villa, we specialize in game play. Whether gathering around a table with cards or dice, playing a competitive game of bocce ball, or splashing about in our well-appointed pool, a good time is always had by all.

Below are some of the games we play, along with the rules to which we abide.

This is a five-dice game which uses a Yahtzee set.
Ante: 1 unit (usually $1)
Object of game: To obtain as low a score as possible, zero being perfect.

METHOD OF PLAY
In this game a 3 counts as zero, all other numbers count at face value. A player’s score is the total spots showing on the dice when he finishes his turn, excluding threes.

Players roll in succession as follows:

The rule of "one tie, all tie" applies, except that if two or more players tie with a zero score, then only these players continue, although the others also have to ante again before the tie is played off. 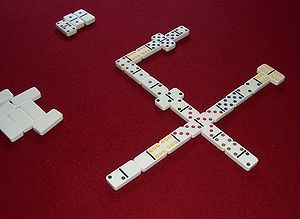 The classic domino game
Ante: None
Object of game: Be the first to lay down all your dominoes.

METHOD OF PLAY
The rules for this game are long. Here's a website with the information.